Applying The Four Laws Of Behavior Change To Mindflows 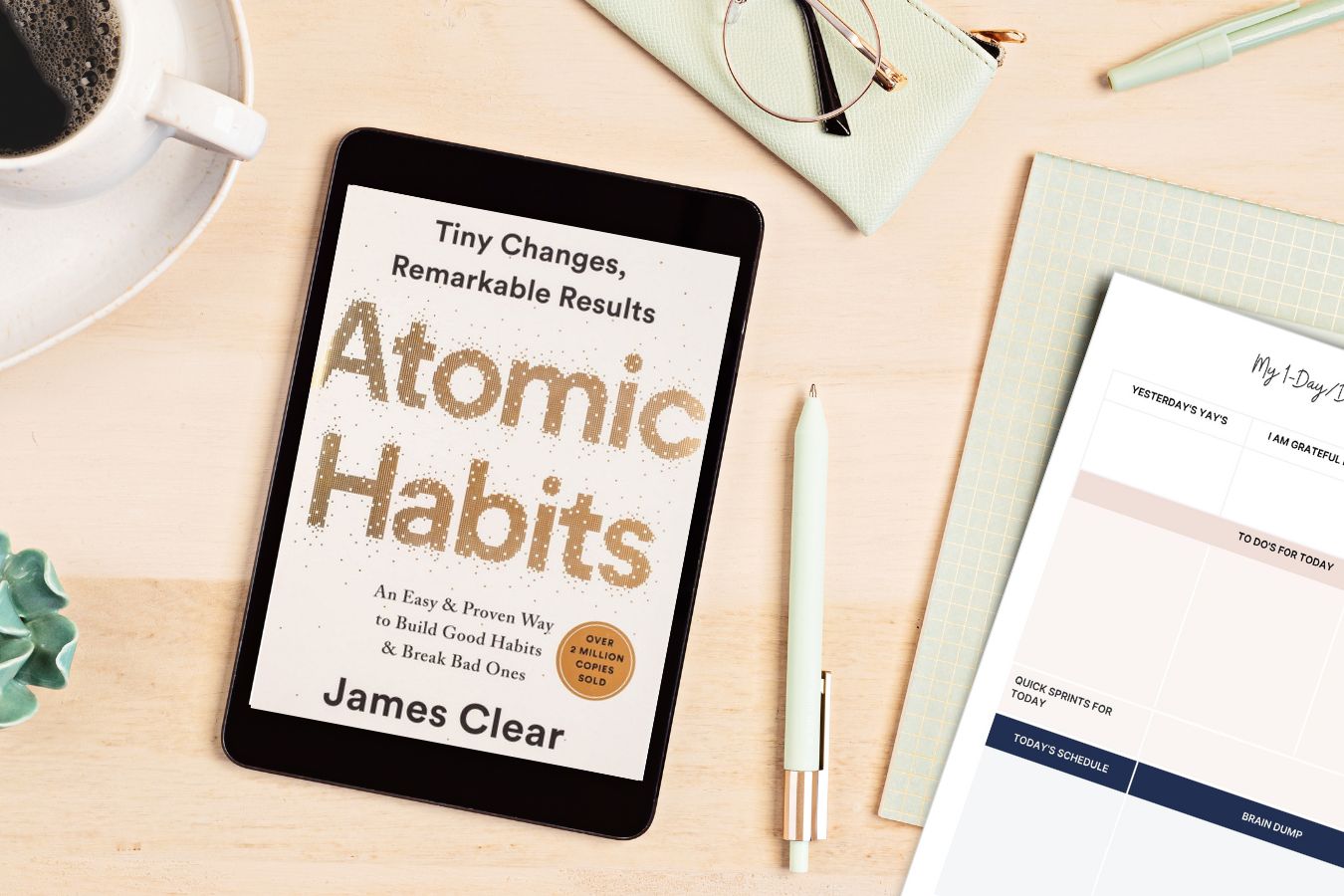 Earlier this week my husband shared his notes from "Atomic Habits" with me, which he read in 2021 and still loves.

And because I liked what he was saying and have heard a lot of ADHD'ers rave about it too, I decided to read it.

So far, there's a lot I like, but there's something specific that has my ADHD brain whirring > his Four Laws of Behavior Change".

These, he believes, makes it easier for us to stick to good habits. If you haven't read it or forget, these are what those are:

I realized the Mindflows philosophy has a lot in common with them, which I think is pretty cool.

This post will break down how they do that. It will also serve my intention to make a record of where I've been successful so far, and how I want to improve and why).

I'll go through each habit and share some of the things I tried to make planning an easier habit to keep and why they weren't successful. Then I'll share what's working now.

So, if you try to incorporate his philosophies into your life and are still trying to figure out how to make planning a desirable habit too, make sure you grab a pen and a notebook. This might help you figure out why.

Let's start with his first law.

One of the first things I tried was writing out my ideas or to do`s under a piece of glass on my desk. I soon found that this only worked if my desk wasn't cluttered with notes or other things.

I also tried to leave my notebook on top of my keyboard at the end of the day so that I wouldn’t be able to miss it in the morning.

Sometimes that worked but usually I'd forget to put it on my keyboard at the end of the day or my day would end unexpectedly.

One of the things I do to now is similar. But instead of putting it on my literal desktop, I put either the 90-day or Big Picture Planner on my computer, as a desktop wallpaper.

For me, this law is about desire. And for me, there are only a few things that satisfy it.

I also purchased a colorful cover and never move it from the area on the desk beside me. The cover is covered by a wonderful, thick laminate. Not only is this hard to lose on my desk, butt the colourful design makes it hard to miss.

That last one fits into James' 2nd law too though…

So, long before I considered designing planners, I had a bad habit of buying pretty, expensive planners and not using them.

Part of the problem was the awful feeling I'd get when I made them messy.

But on the other end of the spectrum, I didn't like using a boring binder or notebook either. And a messy pile of notes just made me want to throw everything out.

That showed me that I needed them to look great and be neat.

My first solution was to design a to-do list on the glass part of a frame, put a pretty piece of paper in the background, and then use a dry-erase marker to add my tasks.

What I loved about this approach was that they didn't take up space on my desk and they were hard to miss.

But then, they just started to look messy because I couldn't keep them neat. And it was annoying writing on them because sometimes my hand would erase something I had just written as I was writing something else.

Essentially, I had a messy frame on my wall filled with outdated or ignored tasks.

The colorful, laminated cover that I mentioned under the 1st law serves this law as well. Not only is it hard to miss, but I actually love how it looks and it makes me WANT to use it.

Having it printed on normal paper that also serves this law because it doesn't give me anxiety about using it,

But sometimes, we can be turned off of planning because we

know that when we look at them, we`re going to feel like we`ve failed. And it turns out this is why I avoided it. To help with this I wanted to make it more of a positive experience.

Over time, this has become a section for "things that are making me happy" which is pretty flexible on purpose. I literally want to start my day thinking about 1 good thing!

But I didn't want to make it too specific because that's when my brain freezes. And that brings me to the 3rd law: making it easy.

I left this pretty open ended because I know we can freeze up with super specific questions. But the main idea of this is to

But sometimes I didn`t know how to answer those questions. The one issue this didn`t solve was not knowing where to start and what to put in them. Long-list overwhelm was another issue.

That brings me to James` 3rd law.

For me, this is basically about removing any barriers so that planning it feels simple and, well, easy. And unfortunately, not knowing where to start or feeling overwhelmed is often a hard stop, which makes it easy to avoid.

For me, I learned that asking certain questions helped me sort things out in my mind and helped me feel more in control. This was the beginning of the framework.

At first, I was still drawing them on frames with a ruler and permanent marker. But this was the opposite of easy. I was still experimenting a lot and it was too time-consuming to make changes. So, to simplify things, I started designing them as printables.

I kept them on lettersize paper because there is a lot about this that's good about it that's relevant to these 4 laws, like:

I was happy at this point because they were helping me pull out the important and relevant information in my brain. They also looked pretty good.

But, I was still left with messy pieces of paper everywhere and I was starting to feel like I was going backwards which brings me to where I am now.

To deal with the messy pieces of paper everywhere, one of the big changes I made was starting to use the discbound system. It basically acts like a binder which keeps everything tidy, but it also makes it easy to take things out and move them around.

I had to invest in the discbound hole punch and discs required an Etsy search, but, I like shopping and since I just needed to do it once, it was worth it for me.

You know how hard it is to stay motivated when things become too routine? I know that feeling well, so when I started feeling the boredom creep in with planning, I knew that I needed to find a way to make it more interesting and satisfying to my senses. Oh, and novelty! I needed some of that too.

For me, things need to feel good in my hands and have to be pleasing to the eye, while still giving me a sense of calm.

So, I started experimenting with the layout, fonts, and colors. I wanted them to look good, of course, but I also wanted them to have a calming effect on me when I used them.

It was definitely nicer to use with the calming colors. And as a bonus, it also made it easier to use. But, it wasn't enough though, which is what brought me to where I am now.

I started to realize that for it to work even better, I needed to add some special sections. These change a little for each of the 1-page flows, but in general, I have found that including a section for wins and gratitude works really well. It's a great way to start the process which makes me look forward to it. I think because it's easy and positive.

I also invested in a nice, thick cover for my discbound binder system. It's colorful and covered in a hard laminate, so I can write in it even if I'm writing on my lap.

I also invested in a creamy, thicker stock. To be honest, I don't always use this paper, but when I do, I find it so much more satisfying. I just feel guilty about throwing out a piece of paper every day. So, I use this for the longer-term flows, but tend to print the daily planner on plain paper most days.

I also use colorful pens. It's not color-coded in a specific way, but when I get bored, I switch pen colors.

There’s still more than I want to do. I still find it hard to motivate myself to use them if I’m super overwhelmed or disappointed for not doing as much as I hoped. But I have some ideas for this.

Make sure to sign up for your free account or grab the latest version to get more ideas for using the 4 laws of behavior change to create a habit out of planning.

Free, practical tools to help you keep your energy and motivation up!

Get Your Free ADHD Rescue Kit
© 2022 by GetMindFlows.com | Proudly created by SusannaMiles.com